Well it shouldn’t be a surprise that the garden is closed, the Spring Fair is off and we have cancelled all our children’s activities for the unforseeable future which is really sad but we’ll survive.

As we’ve got no plans in the pipeline coming up I’ll tell you all about what’s already happened….

The sunny weather is surreal and almost unbelievable after what has been a soggy and wet winter. It was definitely the wettest season we’ve had with the pond path under water for weeks and weeks and much of the garden deeply squelchy under foot.  I always try to use the really wet times to remind myself that if we the ground wasn’t so wet here we couldn’t have a well and in fact there wouldn’t be a community garden as the site wouldn’t have been left to go derelict… so hooray for the bog!(?)! 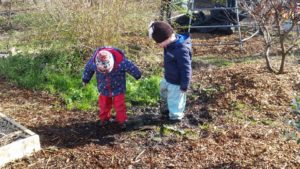 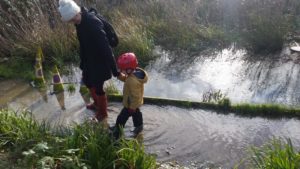 And then the wind came. And such wind! For those who haven’t been to the site or don’t see our facebook page the big news is from winter… THE TOWER OF POWER BLEW OVER!  It was Storm Ciara what did it, but mainly the thick wooden supports had been sat in our wet ground for seven years and had rotted.   But while not a ‘good thing’  it means they we (by which I mean Pete) could look at setting up a system from scratch which actually properly fits the needs of the garden and the allotment site.  The tower panels were enough to power the our needs but didn’t have enough oomph to get the pump going and the water going up the hill so we’d been relying on a cable coming from a house for that for some time.  So plans are afoot for a whole new system and it’s farewell to our lovely tower. 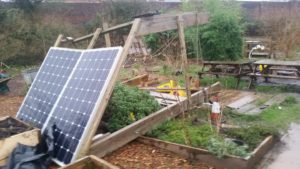 And finally tadpoles!  Back after we first redug the pond 8 years ago we had huge numbers of frogs that came, and each year we’d know it was truly spring when a seething mass of piggy backing frogs filled writhed in the pond and the air was full of their sounds like a giant purring cat.  We loved it! Anyone who saw it can attest that it was incredible.  But over 8 years the frog numbers have been going down. And each year we stand on the side of the pond and speculate to why. As the numbers of frogs went down I’m sure the number of fish when up so I have always blamed them but each year it is very clear that as soon as the frogspawn is laid the newts come and eat it.  And they just get there faces right in and munch away and just keep munching.  Frogs come back to spawn where they were spawned and each year less and less have made it to frog hood.  Well this was the year I only saw three frogs in the pond and so we finally decided to really try and do something about it.  We hoiked out a big load of spawn, Lizzy and Ollie painstakingly removed any potential predators and then placed them in a lovely big bath full of pond water, and thats where they are now.  We have taken out spawn before and put them back as tadpoles which immediately totally disappeared, but this time we’re hoping to bring them on to little froglets – which means getting them past the carnivorous stage! Anyway for now they wriggling away without a care in the world.  And I find it cheering to think about them 🙂

I hope everyone is well, and taking care and staying safe and as sane as can be expected.

See you in the garden once the crisis is over!